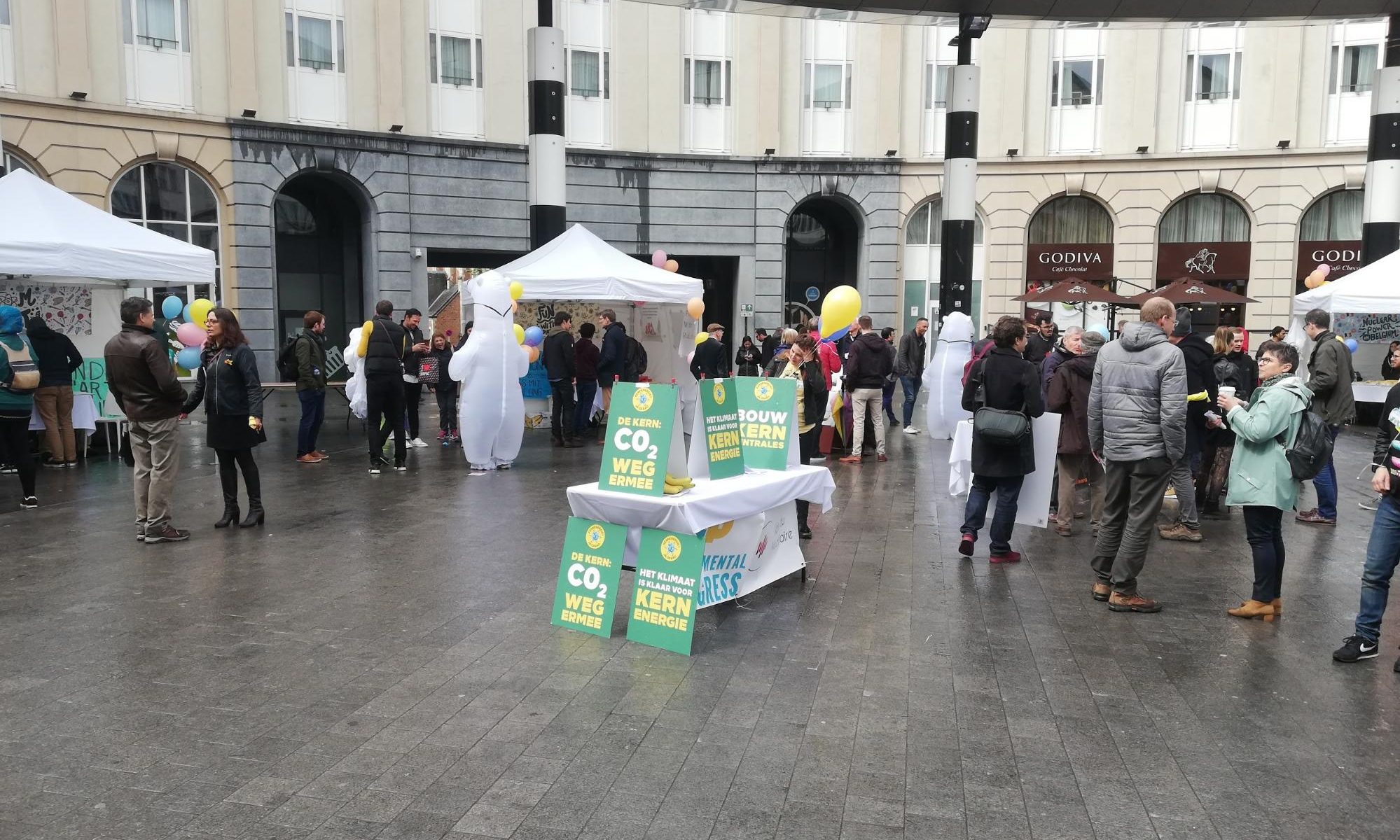 A few days before Easter, I saw a stipendium invite being spread in the Finnish Ecomodernist Society’s active members group. Our very own non-fiction writer and data analyst Rauli Partanen was calling for young(er) people to take part in the weekend. I looked at my calendar and decided to jump on the opportunity, despite the somewhat busy teaching and exam schedule of late spring.

With short conversations and introductions on Slack and Whatsapp, I found myself at Tallinn airport on Friday morning. Earlier this year, I had taken a vow not to make any unnecessary flights, but I felt like in the long term this could do more good than harm and the option of going by train or bus would’ve taken a few days of non-stop travel.

In the airport, I found out that my flights had been cancelled due to the SAS strike, so I was rescheduled to a flight that was making its last calls when I was still in check-in. I had to really rush to get my yearly dose of radiation from the flight, although I must say that I was more worried about my travel sickness and irrational fear of flying kicking in than the high, but healthwise irrelevant doses of radiation. I arrived in Brussels exhausted from the lack of sleep and the stressful rescheduling. It was only a bit past 11, but I had to stop by in a bar to wait for my future hotel roommates, of whom I didn’t know anything about outside of Whatsapp. The bar was full of already intoxicated Japanese tourists, so the trip had a cheerful beginning.

My roommates were nuclear energy students from Italy and Colombia, so we had no problems getting to know each other by starting our relationship with the lightweight topic of energy in different countries. For a person with a background in linguistics and cultural history, it was very interesting to learn about public opinion specifically.

After resting in the hotel, engineering and chemistry were combined, when our small group of 3 people went to familiarize itself with the traditional Belgian Lambic industry in the Cantillon brewery, just some 200 meters from the hotel. We found out that we also have a shared passion for all things brewed. Cantillon is the only brewery in Brussels that still uses the traditional method of making alcohol with wild yeasts from the surrounding open air and they were very proud of their efforts to keep this method the same in the future as well. With customers going in and out it was obvious that tradition was still alive in Belgium. After a fulfilling meal and few delicious Lambics we retreated back to our hotel to rest for the following day of heavy socializing.

Saturday was the planning and preparation day for Sundays fest. After a carbohydrate-intensive Belgian breakfast, we met with the other crew. Coming from the northern hemisphere, I felt like the odd-one out for a while, as most of the group at that time were from Southern Europe and even India.

The atmosphere was light and talkative from the beginning, and it seemed like people were connecting very easily through everyone’s shared interest. Extensive introductions weren’t necessary, and we soon found ourselves laughing at the absurdity of the situation all across Europe, save for maybe some Nordic countries, that have recently started to approach the question of electricity and energy in more practical terms. Listening to the stories from other European countries, I felt even a slight sense of pride for Finland’s approach, mixed with a tragicomic sense of confusion and desperation about the Central European situation. With climate change and the reports getting worse and worse every year, I couldn’t grasp the concept of phasing out nuclear power. I didn’t know the attitudes were as negative as they are. As it later turned out in practice, a large part of the attitudes were related to misinformation or fear.

After a short free-form discussion we were briefed about the basic facts of Belgian energy and the way we would approach the topic on the following day. We were told about Belgiums crazy plan to phase out of nuclear by 2025 already. Seeing Germany’s failures with a much longer phase out plan, it seemed strange that Belgium would decide to follow this way. We learnt just how important nuclear was to Belgium’s electricity, producing over 50% of all electricity (41 TWh a year) and over 90% of clean electricity.

Take it easy! No need to win any discussions

But the Nuclear Pride Fest wasn’t about the numbers as much as it was about making the topic of energy more approachable. Madison Czerwinski from Environmental Progress gave us thorough instructions on how to approach people on the street and how to focus on keeping things simple for the general public. The point was not to win some heated argument, because we all knew that the numbers were on our side. Actually, we were given clear instructions not to engage in aggressive arguments. Our mission was to change the public image of nuclear energy by keeping the messaging light, positive and approachable, and as it turned out the next day, this was definitely the right way to go.

As someone who is not coming from the field of engineering or the energy sector in general, all of this seemed very logical to me. I wondered why only now the communication around the topic has seemed to become more approachable to normal people. Scientists and people working in the field have probably been overly careful on not simplifying issues too much to the extent where it has been hurtful for the cause of fighting climate change with effective tools. This is a very understandable reaction, and I notice it in myself when linguistics, communication or public discourse are being discussed.

It seemed like people were enjoying this change of tone, as we were scribbling postcards, making flower decorations for people and singing adapted songs about love, peace and nuclear power. There was an atmosphere of a strong connection across generations and nationalities. I think everyone present was sharing the feeling of fighting for a cause that was larger than themselves.

Sunday was the actual day of the event and unfortunately the intermittent weather gods were not on our side with showers of cold rain and biting wind. In a way these proved our point about the importance of nuclear energy: How can we produce carbon-free electricity reliably with means that are entirely dependent on the weather, if we can’t even reliably predict what the weather is going to be like the next day? How can we try to electrify or decarbonize all of the industries, if we can’t produce a stable baseload of energy?

Melting in the Melty costume

Having experienced the Nuclear Pride Fest in Munich, the organizers at Nuclear Pride Coalition had decided to pull out the big guns: This year we had not just one, but four Melty the bears! (Can they all be Melty though? – We didn’t think of names for the other three fellows) After a bit of setting up, I was asked to get in one of them, and I almost felt a sense of relief as it was pretty cold outside and I thought the costume would protect me from the outside air. It was also good to start anonymous: despite knowing a lot about communication in theory, I don’t feel very good at it in practice.

It took a bit of time to get used to it, and being rather tall, I had to sort of squat inside the costume to be able to see anything. Luckily this wasn’t visible to the people outside, and I could pull out my most embarrassing robot moves in the costume. The bears gathered a lot of attention from the younger crowd, and while the kids were taking pictures and playing with the bears, other people had a good opportunity to talk with the parents.

Unfortunately, the bear wasn’t water proof, so it kind of started to rain inside the costume as the water condensed. I felt sweaty and cold at the same time, but I soldiered on, as being Melty made me also feel very popular. Eventually I had to give up on being a bear as it was simply getting too uncomfortable. It was time for other people to have their moment of fame.

After a short lunch break, it was time for me to start engaging in conversations with people on the street. At this point, it dawned on me that simplifying the message was really an advantage, since a lot of people seemed to have deep-rooted misconceptions or simply wrong information about nuclear energy and electricity production in general. After talking to people for a while and explaining some basic concepts, most seemed receptive, if not converted on the issue. It seemed like there was a lot of hidden support for nuclear energy and I felt like some people could finally express their opinions openly.

The radioactive snack bananas were a good opener and some started to ask what we had done to them. After explaining that one banana gives you more radioactivity than living next to nuclear power plant for a year, people were even more hesitant to eat them. This often led to a longer discussion that usually ended with people walking away with bananas in their hands and more information in their brains. Personally, I didn’t have a single negative encounter and even the people that didn’t agree were peaceful and open to communication about the issue.

The highlight of the day was probably towards the end when random people started to film our huddle of a choir. It made people smile and we could also end the festival with a smile on our faces. After packing up, it was time for some bittersweet goodbyes and a dinner that ended the weekend, but not the fight for a clean energy source and a livable planet. The small group that was left headed out for some last celebratory beers, where phone numbers and social media accounts were collected. On Monday evening, I left for Tallinn with a shred of hope and with many more friends.

Lauri Niemelä is a member of the Finnish Ecomodernist Society and a language and history teacher by profession. He currently lives in Estonia, that is one of Europe’s most CO2-intensive countries, and hopes that the dynamic and small e-country would take big and bold steps in the fight against climate change.